Our members in Greece, School of the Earth ‘Nea Guinea’, have implemented two energy-related projects in 2019, one focused on solar and one on wind energy. Read more below!

The “Green Energy and Citizens: Design, Education, Implementation” project aimed to inform citizens about Energy Communities and their participation in the production of electricity from renewable energy sources (RES), and energy democracy in general. The project partners were the Greek Network ‘Friends of Nature’, the Community Energy River and the School of the Earth, as well as the Municipalities of Kifissia and Pallini. As part of the project, training workshops for citizens on Energy Communities, RES, and the design of photovoltaic systems were provided in the Kifissia Municipality, as well as a practical installation of a 3kW photovoltaic system with the participation of citizens. Finally, an educational digital application connected to the installed photovoltaic system was created, so that citizens could monitor its operation.

The photovoltaic (PV) system designed and installed as part of the project enables citizens to get in touch with both interconnected and autonomous renewable energy (RES) systems. The system is primarily designed for stand-alone operation, but also allows for future network interconnection. The PV generator is connected to a battery pack, which offers the possibility of storing the produced electricity so that it can be used during the night hours by light loads. The system consists of a photovoltaic generator with a nominal power of 2.9kW, which is installed on the roof of the State IEK Kifissia, in south orientation and at a 30 degree angle to maximize the energy produced per year. The PV generator is connected to the battery pack via the charge controller, which ensures that the batteries are properly charged and also disconnects the PV generator when they are fully charged. The loads are supplied at 230V 50Hz mains voltage and current through a 400W-rated inverter, and consist of three 100W LED spotlights and a 130W light nameplate. Finally, the system has the ability to record data and upload it to an online platform where users can view both production and consumption of the system over time.

One of the results of the project’s actions was the establishment of an Energy Community, involving citizens who met and collaborated during the implementation of the project.

On Monday, December 2, 2019, the State IEK – OAED of the Municipality of Kifissia celebrated the completion of the project, which was funded by the Green Fund for nine months, starting in March 2019.

More information can be found on the project’s blog: https://citizensgreenenergy.communityenergyriver.com/

During a six day course in the beginning of June 2019, School of the Earth ‘Nea Guinea’ built a 2.4m rotor diameter small wind turbine at the Aalto University workshops in Helsinki.

Read more and check photos from the workshop in Nea Guinea’s website: http://neaguinea.org/2019/06/15/wind-turbine-construction-course-at-the-aalto-university/ 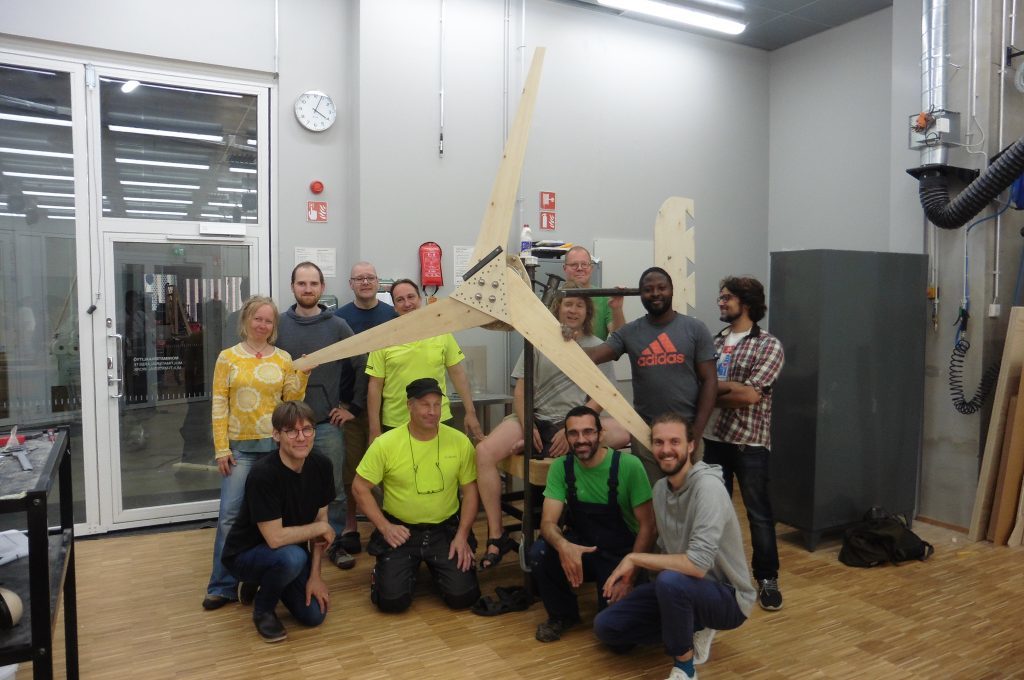